Who doesn’t like a little x-ray-ted entertainment? All x-ray technicians probably have interesting stories about things that have shown up inside patients’ bodies, but they’d be hard-pressed to top this bunch. 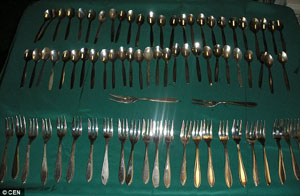 Rotterdam, Netherlands: When Margaret Daalman, 52, visited a local hospital with stomach pains, it wasn’t hard to tell why: x-rays revealed that she had eaten 78 forks and spoons — no knives, because, well, that would’ve been crazy, right? It turns out that she suffered from pica, a condition that causes you to consume non-food items. The cutlery was surgically removed, and Daalman underwent successful psychiatric therapy for her condition, although no doubt her dinner invitations dwindled significantly. 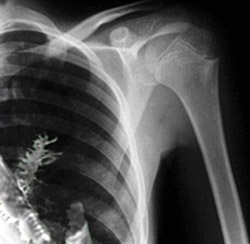 Izhevsk, Russia: Doctors initially diagnosed Artyom Sidorkin, 28, with cancer after he began coughing up blood and experiencing chest pains. However, when he went under the knife to have part of his lung removed, surgeons discovered that the growth they thought was a tumor was in fact a small fir tree. Apparently, Sidorkin had inhaled a seed that took root in his lung and grew into a tree approximately two inches long. On the bright side, his breath smelled like a car air freshener. 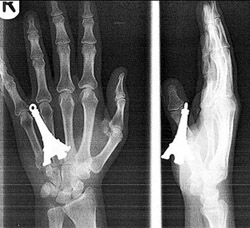 London, England: Amy Preston, 28, stumbled one day while jogging and fell to the ground, her left hand landing on top of her Eiffel Tower-shaped souvenir key ring, which became lodged in her palm. The item was removed surgically, but she was never able to use the Clapper again. 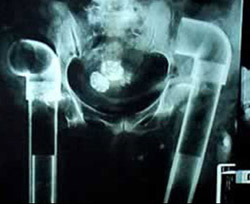 Brooklyn, New York: Four men arrested for organizing a ring dealing in body parts stolen from corpses (including Masterpiece Theater host Alistair Cooke!) were accused of, among other things, replacing stolen bones with PVC pipes so people at the funeral couldn’t tell anything was missing. Note to self: don’t die. 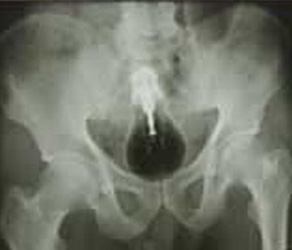 Multan, Pakistan: When prison inmate Fateh Mohamed complained to staff about abdominal pains, he was taken to a local hospital, where x-rays showed the cause of the discomfort was a light bulb inserted into his anus. Mohamed swore he doesn’t know who put it there (ahem), hypothesizing that someone — either guards or fellow prisoners or the Light Bulb Fairy — drugged him and inserted the object into his rectum. 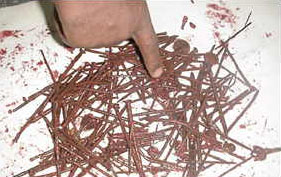 Addis Ababa, Ethiopia: Gazehegn Debebe, 40, checked into the Tibebu General Hospital with uncontrollable nausea, and with good reason: he’d swallowed nearly two pounds of metal. Surgeons removed 222 separate items from his stomach, including nails, pins, coins, keys and batteries (the watch kind, not C’s or 8-volts), which he’d consumed over the course of two years. Relatives claimed that Debebe had a history of mental illness, adding that “he ate whatever we put in front of him.” 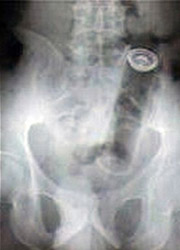 Arad, Romania: Unlike many people on this list, Mirela Gradinaru, 37, knew exactly why she was in pain when she checked herself into a hospital: she had a hairspray can stuck in her rectum. Adopting a strict “don’t ask, don’t tell” policy, she never explained to doctors how the object ended up there, but it’s safe to assume she wasn’t sculpting her butt hair.

Undisclosed location: An unnamed 20-year-old male klismaphiliac (someone who gets sexual pleasure from enemas) was admitted to a hospital with rectal pain. He admitted that his boyfriend had poured a concrete mixture into his anus, not realizing that when it hardened, the mass — measuring almost five inches long and weighing more than half a pound — would be very difficult to remove and quite painful to maintain. According to the case report, “the attending physician recommended a psychiatric consultation, but the patient declined.” Bonus: Inside the concrete slab was a ping pong ball that had been previously inserted into the patient’s rectum. 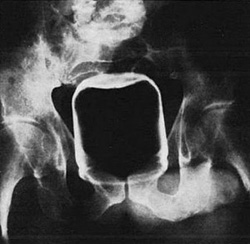 Undisclosed location: An unnamed 65-year-old man checked into a hospital claiming that “he was washing his dog in the shower when he slipped and fell,” landing on…a glass peanut butter jar? Which conveniently (or inconveniently) found its way straight up into his rectum? The jar, a little over three inches in diameter, thankfully didn’t shatter during the surgical extraction, allowing the patient to fully recover and leave the hospital the next day with his rectum intact — even if his dignity wasn’t. Bonus: The case study notes that “foreign bodies in the colon and rectum…are almost always self-administered by male patients.” 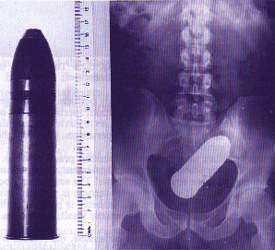 London, England: An unnamed elderly man suffering from a nasty case of hemorrhoids decided to use an old artillery shell from the anti-aircraft gun he operated during World War II to push the ‘rhoid back into his rectum (shudder). Of course, he pushed it too far, and the shell got stuck. Even scarier, though, is the fact that, upon questioning by his doctor, the veteran revealed that his bottom was quite literally “da bomb” (that is, the shell was still live). The bomb squad had to be called to defuse the explosive device before the doctor could venture in to remove it.