How Do X-Rays Work? 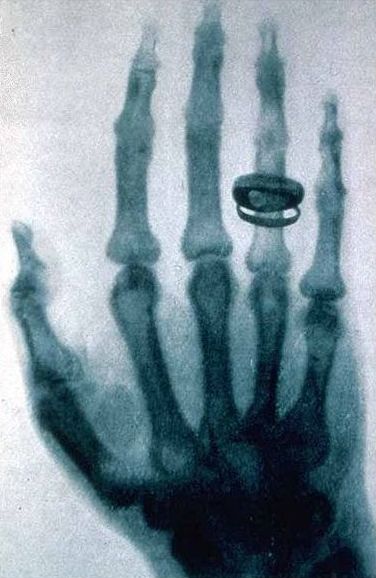 Most of us have seen an x-ray image of some kind, whether it was at the doctor’s office or at the airport security checkpoint. But how are x-rays produced?

X-rays are electromagnetic waves that have a shorter wavelength than visible light. They are generated by an electrical current that passes through an x-ray tube, producing a beam of radiation.

This beam can penetrate material made of light atoms, like human flesh, but it’s absorbed by material made of heavier atoms, like bone and metal. During an x-ray, the radiation passes through the soft tissue in a patient’s body, and hits a sheet of metallic film positioned behind the patient, which stops the beam. Because the radiation flows freely through the soft-tissue areas of the body, the film is exposed to large amounts of x-rays, making those places appear dark. Where the beam hits bone, however, less of the radiation passes through to the film (in part because of the calcium in bones), making these areas appear lighter or outlined.

Along with the metal sheet, a second sheet serves as a filter that prevents the beam from scattering or making the image cloudy. The resulting picture imprinted on the film has come to be known as an x-ray.

Mineral deposits that appear white in an x-ray might indicate the presence of tumors, while foreign metals, like bullets or knife blades, can be identified by their light color as well. Bone fractures can be located by their dark color within the light bone image. Sometimes, a patient may ingest or be injected with iodine or barium in order to make veins, arteries and organs appear more prominently on the x-ray.

High levels of exposure to radiation in x-rays can be harmful to a person’s health, so x-ray technologists must be careful to minimize exposure to both the patients and to themselves.